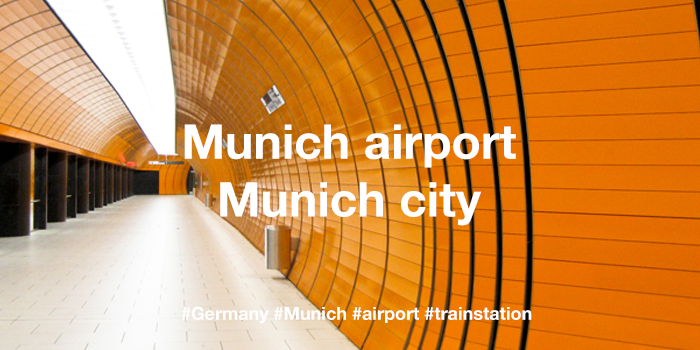 This is a guide about traveling between German city Munich (München in German language) and Munich’s international airport Munich Airport. 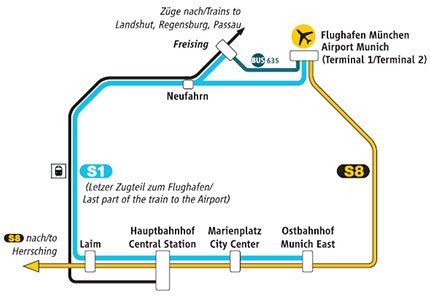 Which train lines run from the Munich airport to the Munich city center?

From the Munich Airport S-Bahn lines S1 and S8 run directly to the city centre. Trains run every 5-10 minutes alternately and the journey takes around 40 minutes. Lets take a closer look on each route:

Warning: On the journey in direction from Ostbahnhof to Munich Airport please be aware that S-Bahn S1 trains split up. Use the part of the S1 train marked as “Airport / Flughafen” (usually on the back side), not Freising (near by Munich airport city). The station for passengers flying from Munich Airport is München Flughafen Terminal (not Flughafen Besucherpark!) Please ask train personal if you are not sure which train carriages are heading to the airport.

How much does cost Munich Airport to the Munich city center by train?

The Airport-City-Day ticket offers the same services as an MVV Day Ticket for the entire network and the same price.

Single journey ticket cost 10.80€ and can be used only once.

Check our individual post for full image guide how to buy ticket from Munich Airport to Munich (both single and all-day ticket).

MVV offers the Airport-City-Day ticket which is a day ticket valid for the entire MVV network.  The ticket allows you change and use all Munich means of transport within the MVV network (counting S-Bahn and busses). The Airport-City-Day ticket is available as a single ticket or as a group ticket for up to 5 people. Any two children aged between 6 and 14 years count as one adult.

The Airport-City-Day-Ticket cannot be purchased from the ticket machines at the airport stations, since they are located at or too close to the airport. When departing from these stations, select the destination “Flughafen” (airport).

You can pay with coins, bank notes, a debit card or a card preloaded German credit card “GeldKarte”. The ticket machines at the airport also accept credit cards.

You don‘t have to validate your ticket. The Airport-City-Day-Ticket is valid from moment you buy till 6AM morning of the following day. Ticket checks are standard in every ride. If you are caught without a validated ticket you will be charged with fine.

Here is a tip how to make a cheapest journey from Munich Airport to Munich city center:

Cheapest option is to buy a Tageskarte Außenraum (daypass for the city’s outskirts). Single ticket costs 6.00€, for double 11.20€. Travel from the Munich airport to Feldmoching station by S1 train. Than buy additional single ticket for the trip into the inner city for 2.60€ per person and change to city center. You will need to exit and mark your ticket from Feldmoching train station. If traveling in opposite direction, from downtown to the airport, you can just validate both tickets because the restriction does not apply.

Munich Central Train Station (Munich Hauptbahnhof) is conveniently located in the centre of Munich. The main station is only a short walk away from the city centre. It is well connected to Munich’s dense public transport network. It offers regional and long-distance connections to many German cities, including several connections with ICE high-speed trains and  also a high-speed TGV-connection with Paris and Strasbourg and other European destinations (Amsterdam, Budapest, Milan, Rome, Salzburg, Venice, Vienna, Zurich, …) with Eurocity and CityNightLine (night train).

If you decide to take a public bus transportation to Munich, there is literally only 1 coach connection between Munich airport and Munich city center – Lufthansa Airport Bus.

If you are not in hurry and do not need to take bus, we recommend you to take a S-Bahn trains. The trains are very comfortable, opened with plenty of space for language and passengers.

German taxis are cream-colored cars with a “Taxi”-sign on the roof. The fare is calculated by a meter in the car but total sum combination of many factors (waiting time, surcharges etc.).

From the Munich airport to Munich City Center the fare will cost almost 50€ and drive takes around 40 minutes. Payment is calculated per taxi and not per person. Passengers can choose to travel in a smoking or non-smoking vehicle.

There is a flat fare of 63 euros to travel directly from Munich Airport to the New Munich Exhibition Centre (Neue Messe München) or vice versa.

Munich is well connected with German highway motor system (Autobahn) with other cities in Germany. The A99 is an autobahn ring around the city which connects the various autobahns. Just follow the airport signs along the motorways and you will connect to A99 leading to/out airport.

Munich has two inner ring roads: Mittlerer Ring expressway and the Altstadtring. Traffic in Munich can be a challenging in peak times. Therefore, and especially because of the shortage of parking within the city center and the more central districts, it is recommended to leave the car in a park & ride car park in Munich’s outskirts close to a S-Bahn station and use public transportation within the city.

Munich airport has 9 different location for short-term and longterm parking.

If you spend a total of 20€ in the shops or cathering facilities you have right for free 3 hour parking.

Your free ticket is valid for a park in the multi-story car park P20. Please note:Entry using credit car is not possible.

You can park up to 5 hours free of charge when you attend events at Munich Airport Center (MOC).

Pick up and return the car is possible from one of the 2 different parking spaces devoted only for rental companies.

Munich airport to Erding or Freising by bus

2 Replies to “Munich airport to Munich”