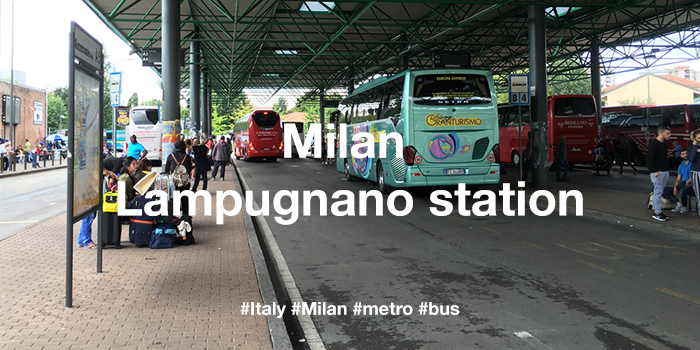 [toc]
Lampugnano is a metro station of Milan’s M1 line and one of the Milan’s bus stations serving local and international bus connection.

Lampugnano station is located in Milan’s Lampugnano district from which it takes its name, on Via Giulio Natta.

Lampugnano bus station is very small and offer very limited services. You can buy newspapers and magazines in station kiosk. Right next to it is located bus travel ticket center offering sales for local and international connection. But for any other shopping such as goods and food you will need to leave bus station and check near by grocery shops and restaurants. Station is equipped with elevators and escalators and is accessible and friendly to disabled or elderly people.

Getting from Lampugnano bus station to Milan Central Station or vice versa, is easy. It require just little patience and care.

Buy a single ride ticket from ATM machine and from side of Lampugnano take direction towards Sesto 1º Maggio. Leave at Cadorna FN (for taking green line – M2) or Duomo (for taking yellow line – M3) for changing to Milan Central Station.

If you left on Candrona FN change a line to M2 towards Cologno Nord or Gessate. Milan Central Station is just 4 metro stops away.

If you leave at Duomo, change a line to M3 towards Maciachini. Milan Central Station is just 2 metro stops away.

Vice versa, on the way from Milan Central Station use the same procedure. But be awere that Lampugnano bus station is on M1 line towrds direction of Rho Fiera.

Be awere of pick-pocketers, escpecially at Duomo which is very huge tourist exchange metro stop.
Link ATM
Link How to buy ticket at ATM machine in Milan