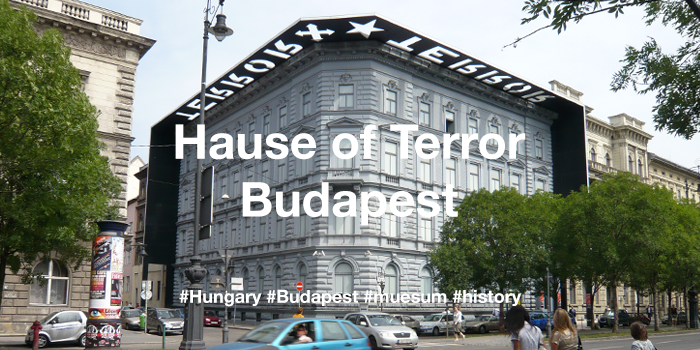 Following text is transscriped from English leaflet about House of Terror:

The “House of Terror” is a museum now, but in was witness to two shameful and tragic periods in Hungary’s 20th century history. It was a truly house of terror.

In 1944, during the gruesome domination of the Hungarian Arrow Cross Party, this building, known as the “House of Loyalty” was the party headquarters of the Hungarian Nazis. Then between 1945 and 1956, the notorious communist terror organizations, the ÁVO and its successor, the ÁVH, took up residence here. 60 Andrássy Boulevard has become the house of terror and dread.

This museum commemorates the victims of terror, but it is also a memento, reminding us of the dreadful acts of terrorist dictatorships.

Whoever has visited Budapest, knows that one of the most beautiful thoroughfares in the capital is Andrássy Boulevard. The tree-lined street, with its lavish residences and stately apartment buildings, connects downtown Budapest to Heores’ Square. It was named after one of the Austro-Hungarian Empire’s greatest Hungarian statesmen, Count Gyula Andrássy. Interestingly the 20th century terror regimes, the Nazis and Communists, both decided on a residence located on this boulevard as the head-quarters of their executioners.

The Neo-Renaissance building at Andrássy Boulevard 60. was designed by Adolf Feszty.

The Hungarian National Socialist movement’s Szálsi branch rented space in the building from 1937. Ferenc Szálasi, head of the Arrow Cross Party, declared about 60 Andrássy Boulevard that, “the Andrássy Bolevard headquarters will always remain for me and for Hungarian popular program the ‘House of Loyalty’.”

During the Second World War, Hungary come into the crossfire of the Nazi and Communist dictatorships. Following the Nazi’ rise to power, the new collaborationist Hungarian government forced Jewish citizens to wear the Yellow Star. The round-up of Jews in the countryside began, followed by their deportation to German death camps. In October 1944, Hungary made desperate attempts to end the war. The vague and feeble attempt failed. The already beaten but not yet conquered Nazi Germany forced Regent Miklos Horthy to resign. This was beginning of the short and bloodthirsty reign of the Arrow Cross.

In the cellar of the “House of Loyalty”, members of the Arrow Cross tortured and killed hundreds of people. In expectation of Hitle’s secret weapon, teenage boys were drafted for useless battles on the Nazi side and innocent Jews were shot and plunged into the icy Danube. The blind faith of the Hungarian Arrow Cross Party members drove the country into destruction. Jews were driven westward to the destruction. The goal was to exterminate the remaining Hungarian Jews.

In 1945, Hungry ended up under Soviet occupation. One of the first tasks of the Hungarian communists arriving on the Soviet tanks was to take over 60 Andrássy Boulevard. The Department for Political Police (PRO) took over the abandoned Arrow Cross headquarters, which later become the State Security Office(ÁVO) and then the State Security Authority (ÁVH).

Gábor Péter was the head of all three organizations. The country learned to fear the former tailor’s apprentice and his terror outfit. They reduced people to subjects: thousands of citizens feared them, and they, in turn, feared each other. If ordered to do so, they killed without hesitation, or on the strength of confessions extorted during brutal interrogations, they sent their victims to the gallows, to prisons and labor camps.

Officers serving at 60 Andrássy Boulevard were masters of life and death.

During the most unimaginable and horrific interrogations lasting for weeks, many of the victims died. Those who survived the body=crushing and soul=debasing pain were ready to sign any document.

A whole host of informers, a shadow army, watched people on factory floors, in editorial rom, in offices, at universities, in churches and theaters, nothing down their every move. These informers received full backing as well as ideological and practical guidance from the Soviet occupiers. Nothing or no one could feel safe from them. It was with their support that the Communists came to power, and build up and preserved their hegemony = a tyrannical regime, which seized, mistreated or crippled one person from every third family.

Since the organization outgrew 60 Andrássy Boulevard already some months after moving in, it began to expand. In the end, they occupied the whole block. The cellars under the building were connected in order to form an underground labyrinth of prison cells.

The State Security Authority moved out of 60 Andrássy Boulevard in 1956.

Until now, the building blended in with the the houses along the boulevard. Now transformed into a museum, it not only pays tribute to the memory of the victims by housing the exhibition, but the exterior also conjures up its spirit. With its transformation, the “House of Terror” is no longer simply a building. 60 Andrassy Boulevard has become a sculpture in the shape of the building, which is a monument of the victims.

The building on 60 Andrássy Boulevard žé is itself the statue of terror, a monument to the victims.

The terror s former house demonstrate today that sacrifices brought in the name of freedom are never futile. From the fight against the two murderous regimes, the power of freedom and independence have emerged victorious.

What you will see

The House of Terror is well sctructuralized museum on several floors and its visit can take you raugly half-day or one afternnon.

Be awere that the House of Terror has two undistinguishable attractions which depict violence in different way and can be very emotional for some people.

First is and Russian tank sitting on the oil plate in the middle of the building. In the  background of only few regime victims killed by this house.

Second is actually basement which was also prison and execution place, death by hanging, with real gallows replicas.